This week I moved to a new workplace which I have been looking forward to for a long time. There will be several other game developers sitting here as well. So it’s going to be really fun to meet new people and have more people to discuss game dev with. We will also have a Xbox and Playstation with a projector to play with during our breaks 🙂 So pretty awesome! My new workplace look like this: 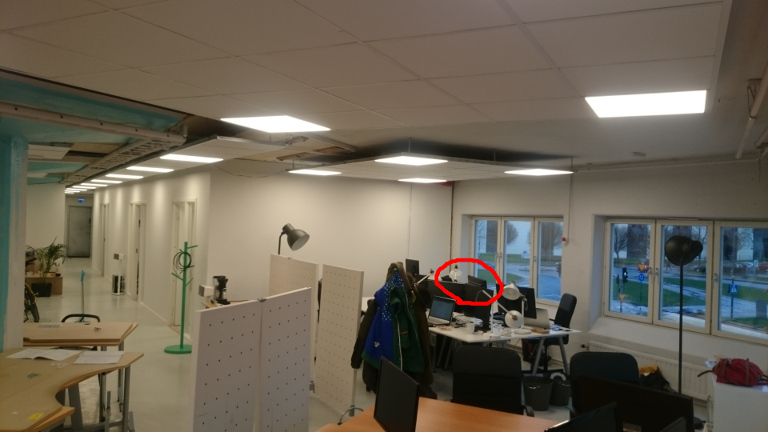 Progress of the game

Many small fixes has been done this week. Now the electricity consumers can use power from different producers (a.k.a powerplants) instead of just one.

The map has to be lit up to be able to build something, so you have to do your building during the day and focus on defence during the night when the monsters spawns.

Mine holes are now placed in a random order over the whole map. One mining hole is placed within every 10 tiles in a circle from the spawn location (start position). So there will be one mining hole (purple square) spawned in each of these colored circles. 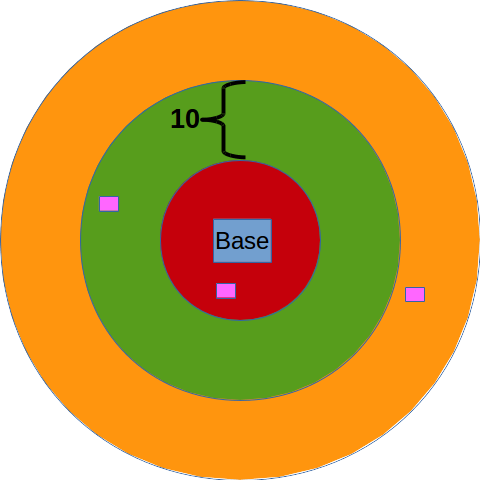 A bug that crashed the game if you removed a tile that still was under construction has been fixed.
The monsters can now span over more than just 1 tile. So I can add bigger monsters which is probably needed later on.

This weekend I’m going to participate in Ludum Dare which is “Create a game from scratch in 48h” The theme will be presented at 3am tonight so I will start as early as possible tomorrow morning and have it done by 3am on the night between sunday and monday.
So on monday I will have the game uploaded here on this homepage so you can try it out. Not to be confused with the game that I been writing about in this blog every week.  I might even stream the development on twitch. So checkout my profile on twitch during this weekend if you don’t have anything better to do 🙂

Spawn: When something in created during game play. For example during the day there will be no monsters on the map. But when the night starts, a monsters is created, for example every 10 seconds. So the monster is created from thin air so to say and this is called spawn. Same thing if you refer to your spawn location. This is the location where you start the game.

Twitch: A website that shows people playing games. But also showing people creating games which will be the case for me this weekend.