Since last Friday I made a game from scratch. Actually within 48h 🙂 If you haven’t tried it already, you can read about and try it here.

Progress of the actual game.

The mining holes are now lit up during the night so the player see them and know where to expand the base towards.
All the buildings has the visibility of 1 tile near during the night. Note that the fading of the light will be a lot smoother later on. 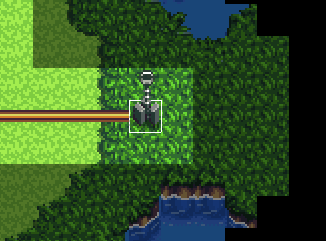 I been thinking a lot about how to make the game fun during this week and also how to make the game as minimal as possible so I have a chance to finish it within a decent time frame. Right now I have to many ideas that I want to implement, but I’m only one person so I really need scale the project down to be able to see the finish line.
So next week there might be bigger changes.

Other than that I have done some background work and bug fixes which is quite hard to show in a screenshot.